It’s a tough world out there in this over-saturated market for rock bands. Anyone and their baby brother can make a record and put it out into the world. There’s no longer the filtration system of a record label having to approve your sound to be presented to the world. And because of this, so much terrible music is being created and put out into the world. And because of that, we are desensitized to the over-used phrases like ‘a must hear’ and ‘talented singer/songwriter.’ I could pick a homeless person off the street and call them a talented singer/songwriter and no one could tell me I was wrong. So what if you’re in a band and you want to get the word out? You have to think outside the box on how to promote.

We’re not talking musical inspiration here. You need to get inspired on promotional tactics from other realms. For example, in the world of trade shows, there are ways of attracting the passers-by to your booth. You have flashy signage, give aways, exciting audio visual interactive displays. Why don’t bands employ this type of marketing at their shows? They could and should. You can get pop up booths from cheap online resellers like http://thedisplayoutlet.com and have a merch booth that will blow minds. It will be worth the investment. Instead of the age old annoying question of where to set up the merch, you come to the gig with a booth that catches the eye and brings in the bacon. Be sure to have a super hot merch girl, too, that never hurts.

What’s the best way to get fans into your music? It’s to have music that’s awesome and then have people listen to it and love it. But they can’t listen to it unless they have access to it. Face it – you’re not going to get on the radio just now. But what you can do is offer you music for free and encourage people to come get it for free and to listen to it. You need to jazz it up, spice it up, and get people to actually download your music and give it a listen. Put download cards for free all over – at coffee shops and at clubs and everywhere you can think of. For every 1000 download cards, you’ll probably get 10 listens, and 5 new fans. But if 1000 download cards costs you a few dollars, you are talking about an easily recoupable expense that is a no brainer. 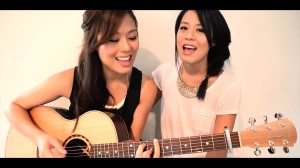 Then there’s the cheap easy way out. Don’t think of it like that. If you do a clever cover of a popular song on YouTube, you will definitely generate new fans of that song and even fans that don’t like that song but love what you did with it. Sure, you need to develop some thick skin, because haters will hate, and will say you’re lame. Would you rather have 995 people who like you and 5 haters, or no new fans because you weren’t willing to put it out there? You don’t want to be known as the band who does that funny cover of Gangnam Style, but if you get more viewers and fans, that can’t hurt now can it.