Is Buying Real Estate With Bitcoin Safe, Or Even Possible? 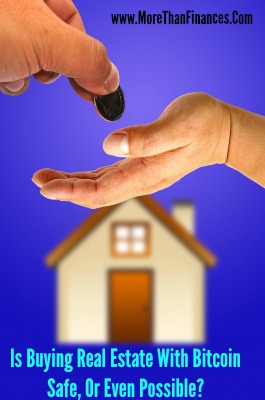 My wife and I have discussed buying a house on multiple occasions. With me being the frugal person I am I’m always looking for better, safer, and cheaper ways to make large purchases. So one question that I had to find the answer to was “can you buy real estate with Bitcoin?”

CNN Money Describes Bitcoin as a new currency that was created in 2009 by an unknown person using the alias Satoshi Nakamoto. Transactions are made with no middle men – meaning, no banks! There are no transaction fees and no need to give your real name. More merchants are beginning to accept them: You can buy webhosting services, pizza or even manicures.

Basically it’s just currency, one that has no national, or bank affiliation. This makes the transaction fees nothing and some people more nervous about it then any other currency out there.

Simply put yes it’s safe. You can find arguments for both sides of this argument but the basics are this. The Bitcoin itself is safe, you can hold on to it and not lose your Bitcoin. However, the volatility is what some consider to be unsafe. In 2016 the price has ranged from $358.77 (January 15th) to $916.79 (December 23rd) which sounds like it makes it a great investment, however it’s also lost that same amount of value in 2014.

So weigh the options of what you consider safe, Bitcoin is not the Dollar and will react differently to world events. When Britain left the European Union Bitcoins price went up when most everything else lost value.

Can You Buy Real Estate With Bitcoin?

What can you buy with BItcoin? Well if you know where to shop almost anything. More online retailers are taking Bitcoin as a form of payment. Stores like Overstock.com, Ebay, Amazon, Target, CVS, WordPress.com, Subway, Victoria Secret, Paypal, the Apple App Store, and more. Using these sites you can buy everyday things from soaps and shampoos, to movies, to even furniture. But what about something as large as a house?

Speaking with a local real estate agent she told me that as long as both parties agree on the price, and form of payment that there would be no reason that a house couldn’t be purchased using Bitcoin. She did explain that there are fees that are involved that most likely wouldn’t be able to use just bitcoin, like inspections.She also joked that she wouldn’t want her fee to be in Bitcoin but would accept it if that’s the way it came.

If you don’t want to negotiate with a specific buyer but instead want to find someone already trying to sell their house for Bitcoin then check out Bitcoin Real Estate, or BitPremier. Both of these sites already sell for Bitcoin and you don’t have to try to negotiate the price to Bitcoin.

This isn’t just in the United States but you can find houses all over the world selling for Bitcoin. In fact part of the great thing about Bitcoin is that it’s available everywhere, you can spend it world wide.

The Future Of Bitcoin

No one knows exactly what will happen in the future. We know that as of right now not only can you buy real estate with Bitcoin, but that it’s safe to do so.

What about other things, like prescriptions? Can those also be bought with Bitcoin? Next weeks article will discuss that and more.

Image by phanlop88 at FreeDigitalPhotos.net